Magnus 1.8-12x50i is a so-called general purpose riflescope that is very suitable for elk hunting and stalk hunting. The riflescope offers a relatively wide field of view at a minimum magnification of 22.5 meters, 100 meters away, so that the target can be found quickly. In the stalk hunting 12x magnification is sufficient for most hunting cases. Leica's so-called flagship series, Magnus-riflescopes are designed and manufactured In Germany.

The riflescopes is a 340 mm long, with 30 mm main tube with a sandblasted surface. The riflescope is waterproof and withstands water pressure up to 4 meters deep. The tube is filled with nitrogen gas. The riflescope models are available with a normal 30 mm tube mounts and the Zeiss internal track mounts.

The Lenses are coated with dirt and moisture-repellent AquaDuraTM lens coating, which allows with an excellent lens grinding approximately 91% light transmission. Riflescope adjustments are easy to use even with gloves in hand and in the dark. Adjusting riflescopes crosshair for 100 meters, one "click" is 1 cm.

For the Magnus-riflescope it is possible to have different types of illuminated crosshair, such as; 4a, 4a + BDC, Ballistic, Ballistic + BDC. In the middle of the reticle there is an illuminated red dot, which is automatically activated on the movement or alternatively with the control switch. The red dot turns off automatically in three minutes or if the weapon, to which the red dot aiming reticle is attached, is raised to more than 75 degrees, for example, the weapon is put on the back for transport. The illuminated red dot makes it easier to aim especially in the morning and dusk, in slightly worse light conditions. The brightness of the red dot In the center of the reticle is adjustable to 60 levels and the last brightness level can be saved. 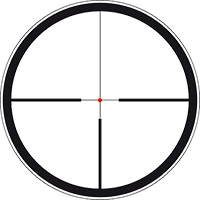 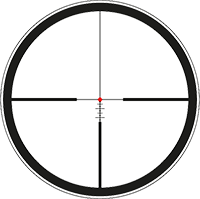 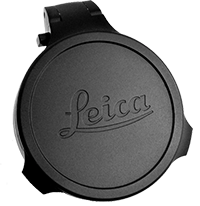