Blaser BD14 drilling has one shotgun barrel and two rifle barrels (example case .222 Rem and 6.5 x55SE). When shooting with rifle barrels, it would be meaningful to align the rifle barrels so that both barrels can be fired accurately, without the riflescope adjustments needed to be tackled.

However, there are two "schools of thought" of the barrel aligning. Others want both barrels to hit, with a selected ammunition, roughly to the same point. Others want the barrels to hit the target same as the barrels are attached to the weapon. In this case (the Blaser BD14) a smaller caliber barrel, should be 12.5 mm to the right (see illustration below), the larger caliber barrel hit point to the bottom.

It is recommended that the barrels should be aligned, with the selected ammunition, a recommended factory-specified shooting distance (GEE/MRD = Most Recommended Distance).

First a larger caliber rifle barrel is aligned, by adjusting the riflescope, on the desired distance. If The alignment is unclear, first read more about how to align rifle with riflescope » Riflescope aiming

After this, it is still necessary to check that both barrels shoots as desired. If necessary, you can do so-called refinement adjustment with riflescope controls. 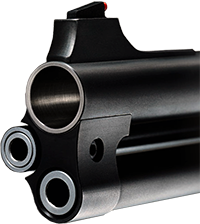