The German hunting guns manufacturer Blaser Jagdwaffen GmbH started to manufacture combination guns already in the late 1960. Blaser D99 -drilling was introduced to the market in 1999, in addition to the same construction based on twin rifle barrel D99 Duo was introduced in March 2000 at the IWA Fair in Nuremberg. Later came the model D99 Trio, with all three barrels, are rifled.

Blaser D99 -drilling has a so-called Jäger -breach block mechanism, which was patented in Suhl by the rifle manufacturer Franz Jäger over a hundred years ago in 23.11.1906. On the breach block mechanism, the end of the barrel is closed with a separate closing block (bottom part), which contains the firing pins. This breach block at the same time reduces the recoil effect on the firing mechanism itself. The Jäger -breach block is very strong and stable, allowing the use of lighter metals elsewhere in the lock body, which in turn reduces the total weight of the gun.

The weapon has a double-trigger firing mechanism. The frontmost trigger releases, depending on the position of the selector, either the rifled rifle barrel or the right-handed shotgun barrel. When the selector is in the top position, releases the frontmost trigger of the rifle barrel. The rear trigger releases, regardless of the position of the selector, always on the left-hand shotgun barrel. The barrel selector is positioned to the right of the trigger guard and the other end is visible on the right side of the folding latch.

There is no trigger pull tuner (snellar) in the weapon, because the trigger pull is really good. The weapon has a so-called Double Lock System, which means that the weapon is cocked only when the shooter cocks it by pushing the cocking slide to its front position. Usually drilling is cocked when the gun is folded and then closed.

The Rifle barrel is free-floating (Thermo Stabil), which means that they have not been soldered onto each other. The advantage of this is that the hit point will not change with the thermal expansion of the barrels. Barrels and cartridge housings are manufactured by cold forging, of the toughest possible steel quality. The lock frame is anodized and the surface of the barrel is nitrided to ensure maximum protection against rust. The contact surfaces of the barrels and the lock are polished steel.

In the Drilling, the barrels are aligned so, that when firing the gun all the three barrels projectile hit points should be at the same or at least very close to each other at the desirable distance. This should also be successful when using the optical sight device. At least with D99 -drilling this distance is about 35 meters, apparently also with D99, when the shotgun barrel is used with a Rottweil Exact 20/76 Slug cartridge. The Exact Slug cartridge contains 26 grams of a Gualangi-type lead slug and plastic stopper with muzzle velocity of 455 m/s. When the Exact cartridges is used, the shotgun barrels slug hit points should be located about five centimeters (5 cm) from the hit point of the rifle barrel.

After the blanks have dried enough, the stock wood quality control is executed and the quality class of the wood is determined. The blanks for the Blaser weapons are classified in nine grades (Grade 3 – 11). The more unusual is the pattern of the wood, the greater the number that indicates the quality class and the more valuable it is.

Blaser BD14, presented in this article, all wood parts are Grade 7. The hand guard is a wider model with a darker, ebony wood on its head part. The cheek deck is a Bavarian pattern and has an additional grooving, highlighting the shape of a cheek set. Different engravings are available for the gun's wood parts.

There is possibility to have integrated recoil absorber (kickstop) inside the stock. Kickstop absorbs the weapon's recoil by about 20%. The recoil absorber is a steel cylinder that is filled with granulated tungsten. The suppressor adds a little bit of weapon weight, but as said to reduce the recoil and in addition stabilizes the weapon.

The German gunsmith Horst Blaser founded the Blaser Jagdwaffen GmbH gun factory in 1957, in southern Germany, in the Baden-Württemberg region, in the town of Isny im Allgäu. The first weapon models were the Blaser "Diplomat" combination gun and the Blaser 60 BBF rifle-shotgun. 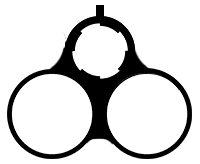 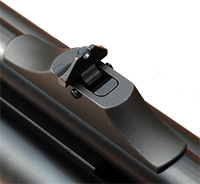