Blaser BD14 + Zeiss Victory V8 (2.8-20x56) the shooting test was carried out on three days, in total by five different shooters. The Test shooting was carried out on a 100 meter outdoor shooting range, from Caldwell shooting rest, with rifle barrels. In Addition, a test was performed from at the distance of 35 meters, with open sights shooting, with all barrels. The firearm and ammunition for the test was supplied by the Blaser weapons Finnish importer Nordic Distribution Oy (Nordis).

During the tests the weapon and the ammunition worked flawlessly. There were no misfire cartridges. The test was shot with three-shot series, with both rifle barrels,. 222 Rem and 6.5 x55SE. The bullet muzzle velocity speeds were measured with the Labradar projectile velocity radar.

In the test weapon, the Blaser BD14 has 56 cm long barrels, which differ in length from the length of the Lapua’s test barrel. The test temperature was also quite different from the temperature of the Lapua’s test, which in turn influences the behavior of gunpowder, so that the muzzle velocity data reported by the cartridge plant is therefore not directly comparable.


Observations on the results of the test

Blaser BD14.222 Rem barrel was much better suited for Lapua FMJ than a Lapua Naturalis whose bullet did not seem to stabilize properly in this weapon. Lapua FMJ has a lower muzzle velocity than Lapua Naturalis. When shooting 6.5 In the x55SE caliber barrel, with the Lapua Naturalis cartridge achieved smaller groups in each test than with the with Lapua Scenar cartridge.

Observations about the muzzle velocity at different temperatures

In the Drilling, the barrels are aligned so that all three barrels should hit roughly the same point or at least very close to each other on a desired distance. This should also be successful when using the optical sight device.

The testshoot with Blaser BD14-Drilling was carried out on a 35 meter shooting distance. In the shotgun barrel was used the Rottweill Exact 20/76 slug cartridge. The Exact cartridge contains 26 gram Gualagi-type lead bullet and plastic stopper combination with a muzzle velocity of Vo 455 m/s. Lapua Scenar and Lapua FMJ cartridges were used in the bullet barrels.

The Blaser BD14 barrel test was performed at the firing range 18.2.2019. The test was shot with a gun with open sights, first a shot from a shotgun barrel, using the Rottweil Exact cartridge. After that shots using the rifle barrels .222 Rem Lapua FMJ and 6.5 x55SE Lapua Scenar cartridges.

It should always be remembered, that the result of the shooting test is specific for test weapon. The suitability of different manufacturers cartridges for the test weapon, has its own consequences (example bullet weight and shape, and output rate). The magnitude of the human impact also varies slightly from one shooting series to the next one, especially when shooter using weapons iron sights. 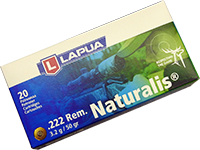 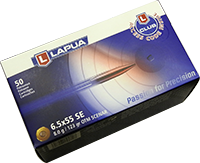 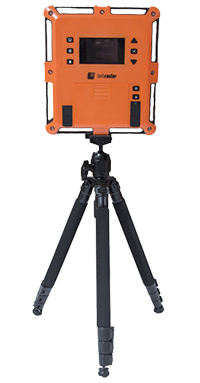