A cartridge is an ammunition used in weapons. In cartridge, the projectile is connected to the case and powder. Cartridges are classified into to two main categories, centerfire cartridges and rimfire cartridges.

Shotgun shell means a ready-to-fire rimmed cartridge consisting of a case, base, bullet or pellets, wadding, powder and of a primer placed in the center of the base of the cartridge, and a cartridge of a corresponding structure.

Centerfire cartridge means a ready-to-fire cartridge consisting of a case, bullet or pellets, powder and of a primer placed in the center of the base of the cartridge, and a cartridge of a corresponding structure.

Rimfire cartridge means a ready-to-fire cartridge consisting of a case, bullet or pellets, powder and of primer mass placed on inside the rim cavity causing the powder to ignite, and a cartridge of a corresponding structure.

Gas cartridge means a ready-to-fire cartridge spreading tear gas or an incapacitating substance with a comparable purpose of use and effect consisting of a case, powder, primer and of a part turning into a gas when fired, and a cartridge of a corresponding structure.

Signal cartridge means a ready-to-fire rimfire or centerfire cartridge manufactured to be used for signaling and illumination consisting of a case, powder, primer and of a part producing light, smoke or sound when fired, and a cartridge of a corresponding structure.

Projectile is usually a bullet or, for example, a rifle cartridge. The bullet is placed in the front of the case. Usually the bullets are brass-shell and lead-filled. For military use, the filler may be a steel or hard metal core. » read more

Cartridge case is usually made of brass, steel cardboard or plastic. Its task is to assemble the different parts of cartridge in to one whole combination. » read more

Gunpowder acts as a propellant for cartridges and is placed inside the seal. A Non-smoking gunpowder can resemble flakes or leaves, cylinders or flattened balls in appearance. The gunpowder crystal size is small and regular. The burning speed of gunpowder is so high that the bullet typically receives speeds of approx. 300 to 1200 m/s. The speed of the bullet is significantly influenced by the quality and load of the gunpowder input in relation to the bullet weight. » read more

The primer is positioned on the back of the case (bottom). The brass-plated primer contains an impact-sensitive explosive and explodes with the impact of the gun's firing pin. The focused explosion of the primer ignites the gunpowder inside the case, which in turn ignites producing a sufficiently high pressure behind the bullet. The resulting pressure, in turn, causes the bullet to break away from the case and move inside the barrel a very fast speed towards the target. The rifling inside the barrel will cause the bullet to rotate around its axis. The purpose of the rotational motion is to stabilize the bullet's ballistic trajectory. » read more

According to Finnish hunting law, the power of shotgun and rifle cartridges used for hunting must meet certain minimum requirements. The performance requirement of a cartridge is determined by a following. » read more 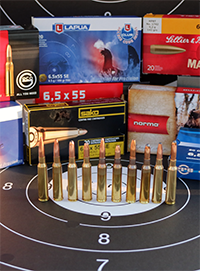 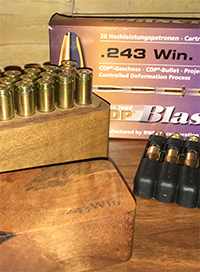 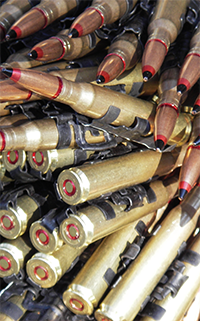 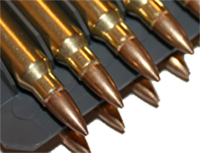 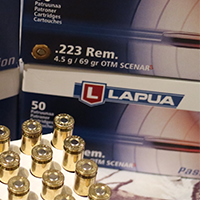